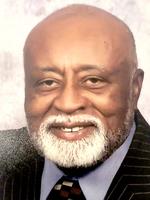 As a fearless preacher of the gospel and teacher of the WORD, Pastor McCain was used by the Holy Spirit to lead many into accepting CHRIST as LORD and SAVIOR. He was also a career veteran of the US Army and US Navy and served his country in combat duty assignments during various employments.

After retirement from military service, he continued to be a “soldier of the gospel” while also working as a mail carrier for the US Postal Service until retirement. Due to health reasons that restricted his mobility, he limited his governing activities associated with the Last Advent Christian Church but continued to function as an elder.